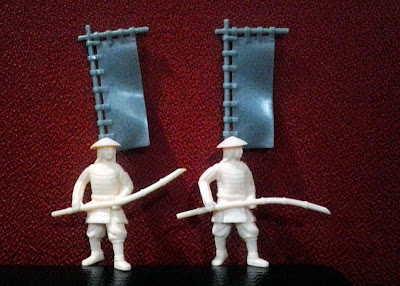 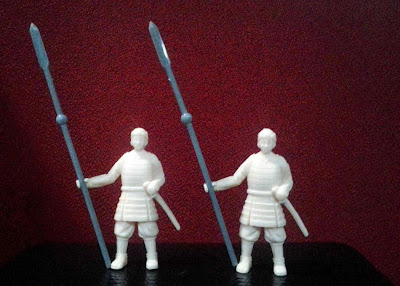 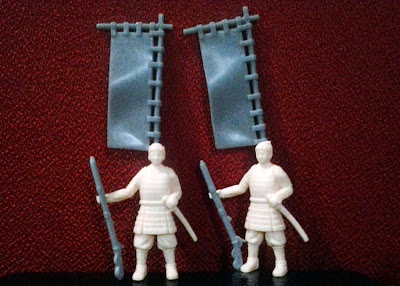 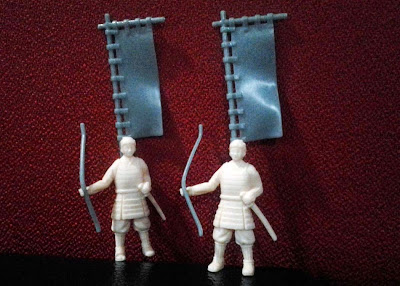 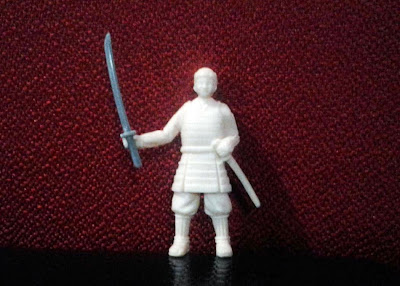 Takara Tomy A.R.T.S. Ashigaru gashapon. Each capsule contains 2 figures and a variety of alternative weapons which include a sword, a Hoko yari (long spear), a Yumi (the Japanese asymmetrical bow) and a tanegashima (Japanese matchlock). A sashimono (banner/flag) is included in each capsule and can be attached to either figure.
Ashigaru (足軽 lit. lightfeet) were foot-soldiers who were employed by the samurai class of feudal Japan. The first known reference to ashigaru was in the 1300s, but it was during the Ashikaga Shogunate-Muromachi period that the use of ashigaru became prevalent by various warring factions.

The warfare of the Sengoku period (15th and 16th centuries) required large quantities of armour to be produced for the ever growing armies of ashigaru. Simple munition quality (okashi or lent) chest armour (dou or dō) and helmets (kabuto) were mass produced including tatami armour which could be folded or were collapsible. Tatami armour were made from small rectangular (karuta) or hexagon (kikko) armour plates that were usually connected to each other by chain armour (kusari) and sewn to a cloth backing. In the 16th century the ashigaru were also armed with matchlocks of the type known as tanegashima. Small banners called sashimono could be worn on their backs during battle for identification.

February 05, 2013
When I was a kid a few decades back, the most easily available model kits in my country were ESCI and I gleefully spent a lot of my small allowance buying models in 1:35 and in 1:72. These figures were made by ESCI and depict German infantry from the early years of World War 2. The set came packed with a 1:35 Demag D7 1-ton halftrack in one of their popular combi sets. The figures were cast in a rubbery plastic, much like a rubber eraser and were actually bigger in scale than the model included in the kit.  Sculpted in rather stiff poses, the Germans were kitted with smart uniforms and marching boots, dating these to the early years of World War 2, probably during the invasion and occupation of France. All the figures were equipped with the appropriate ammo pounches, the cylindrical German gas-mask cannister, the slung bread bag and canteen. Some were also kitted out with the rolled shelter and a few have the entrenching tool and bayonet combination.  Some h
2 comments
Read more